(Runnin' With The Dweezil does not claim to be endorsed by Van Halen.)

This is the choice for the biggest Van Halen fans around. At less than $2 per episode this is the most affordable and complete package around! Every single episode from The Early Years and Right Here, Right Now plus way more!

(Runnin' With The Dweezil is currently in production - All Season Bundles will populate as the episodes are released in order.)

The live stream audio resolution is 16bit-44.1k @ 320kbps. When downloading the episodes, the downloads will be high-resolution FLAC files at no extra cost.

Once the content is purchased, the files can be downloaded, then loaded into any preferred audio player, such as (Apple Music or Spotify or similar) or using an internet connection, the files can simply be streamed from dweezilzappa.com directly to a preferred computer or phone.

Reward Points earned by dweezilzappa.com community members contribute to even better pricing options for all products on the site. The more love you show, the more your rewards grow!

Ok, so wonderful that you had a ‘Runnin’ With the Dweezil’ conversation with CPA! I’ve followed him since the MetroAmp forum days from around 2009 and I’m happy to say we’ve had a blast chatting on Facebook and through e-mail. He’s obviously a fellow Edward disciple and he shares the deep love of the DEEP details…we’re all kindred spirits for sure!

I love that you discussed ‘The Wild Life’ soundtrack…very timely since Chris Gill and I have made some discoveries related to that film soundtrack that I’ve shared online elsewhere which I wanted to share here for the gearheads!

Wolf recently posted a pic of the Veillette-Citron Baritone Shark guitar that me and my buddy Chris from Guitar World have been talking about for months. You all know that Chris is the co-author of ‘Eruption: Conversations With Eddie Van Halen’ a true player and gear nut in addition to his many contributions to Guitar World and other publications over many years now. He’s regularly in touch with me and many others in the hardcore Van Halen fan community. At any rate, in a social media post originally on Instagram, Wolf said he’s just finished using it on the new MammothWVH record when he was tracking bass.

A while back, Chris and I discussed the Veillette-Citron Shark baritone that we had seen pictures of with Eddie in the 5150 studio around the time of the recording of the ‘1984’ album. 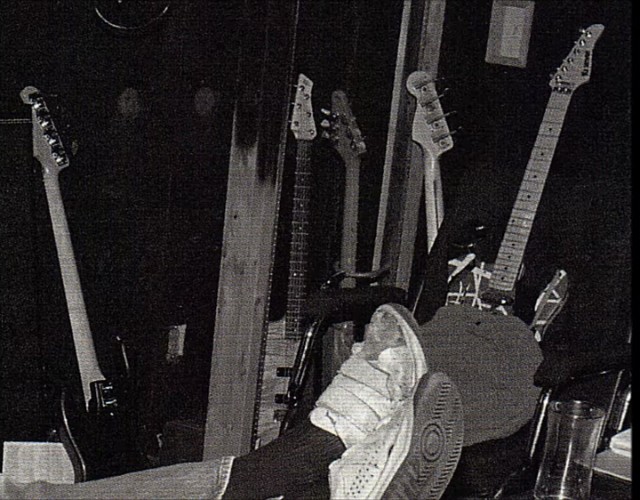 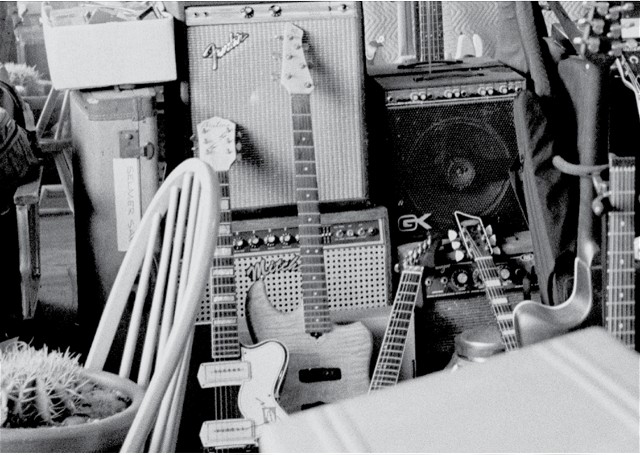 You can read more about the Veillette-Citron company here: https://www.veilletteguitars.com/press_citron.shtml

Chris said that he would ask Matt Bruck and Wolf some questions about that guitar on my behalf when he was to interview them right after the Wembley Taylor Hawkins tribute gig. He also said that he would mention to Wolf that I and other fans know that he had to work hard to be able to play all that Van Halen material on guitar just like we all have to work and that those that say “it’s all in the DNA” are dead wrong. You can see Chris mentioning this to Wolf in this clip that you may have seen:

As you can see, Wolf appreciated hearing that! It doesn’t matter who your parents are…like say if your Dad happened to be Frank Zappa for instance…you STILL have to work your BALLS off to be able to play music. It isn’t DNA…it’s hard work! (end of rant).

Matt also answered all my questions. I had theorized that Eddie used this Veilette-Citron Shark baritone to write the drop A riffs on “Good Enough” from the ‘5150’ album. I further guessed that he came up with the idea of using a .60 gauged La Bella/Steinberger bass D string for the 6th string slot on the ‘1984’ Kramer guitar and tuning that low 6th string down to A so that he could play the riffs that he came up with on the baritone on the low strings and still be able to play regular lead on one guitar. Incredibly, Chris brought my theory up to Matt and he confirmed that my guess was EXACTLY what happened.

I was shocked to find that my theory hit the nail directly on the head! What are the chances?!

I knew that Eddie used the ‘1984’ Kramer on “Good Enough” both live and on the studio version from ‘5150’. But I also guessed that he WROTE the riffs on the Veillette-Citron Shark baritone. Incredibly, that’s exactly how it went!

I feel pretty certain that Eddie might have used this baritone on “Donut City” and the early version of “Good Enough” from the soundtrack to ‘The Wild Life’. I’m also guessing that Ed might have used this Veilette-Citron Shark baritone for the unreleased octave lower doubling of the tapping intro to “Hot For Teacher” that engineer Brian Kehew mentioned hearing when he went through the masters several years ago. Brian said it was very similar to what Sheehan and Vai did on the Eat ‘Em and Smile/David Lee Roth band version of “Shy Boy”. It’s also possible that Ed played the rest of the bass on the song using that instrument too, but that’s a guess. Again, Matt and Wolf have not specified which songs Eddie used the Veillette-Citron Shark baritone guitar on yet, Matt confirmed to Chris only that Eddie did use it on the '1984' album…these are just some of my guesses.

Anyway, as soon as I saw Wolf’s Instagram post on 10-23-22 where he says that he used the Veillette-Citron Shark and the 1963 Gibson Les Paul TV Jr. from “Dirty Movies” on the new album that very day,

I e-mailed Chris to alert him if he hadn’t seen it yet. Almost as soon as I e-mailed Chris, he spoke to Matt. This is the e-mail Chris sent back to me:

It turns out that me and Chris asking about that guitar got them thinking about it and they pulled it out solely because we asked about it…and as a direct result, Wolf ended up using it on the new MammothWVH record! Un-f-ing-believable.

Then, the next morning, Guitar World posted this story which many of you have seen already. https://www.guitarworld.com/news/wolfgang-van-halen-evh-guitars-album-2

A few days later, Wolf confirmed that the tuning for the Veilette-Citron Shark baritone is A-A-D-G-B-E.

Which is the “Good Enough” tuning of course and I reckon it might also be the tuning for “Donut City”- I still need to check that. Which goes along with what I mentioned regarding the whole thing about the 1984 Kramer, the low A bass note with the bass D-string and all that which I supposed was him referring to “Good Enough” and it’s writing process as Matt confirmed.

Greg Renoff also told me that there was a 1983 memo to Warner Bros. that Ted sent them about songs in progress for what would become “Good Enough” which had a song called “Baritone Slide” willing to bet that was Ed working on “Good Enough” even then in 1983. The title “Baritone Slide” makes sense when you consider how much sliding there is in those riffs, but without an actual metal or glass slide-Ed is just sliding with his fingers of course:

And then you have probably heard this boot from 3-24-84 of the “Ain’t Talkin’ ’Bout Love” encore with bits of “Growth” and several riffs from what would become “Good Enough” later on where he is clearly screwing around with that A tuned low 6th string:

and as the brief ‘Lost Weekend with Van Halen’ footage from April 5-6 1984 Detroit with the “ATBL” encore shows, we see Ed using the 1984 Kramer with the original standard chrome Floyd, not the black one he would later (almost) permanently modify to accept the bass string (until he reconfigured it back to a standard chrome Floyd and gave it to Wolf), clearly at 4:51 here:

I don’t hear Ed using the low 6th string at all in this recording, he’s avoiding it and playing “ATBL” on the top 5 strings. I think he was already experimenting with that low A note in April just as he clearly did in March, and he was using the 1984 Kramer as the guinea pig.

But at any rate, it is great that Wolf confirmed the tuning and it is indeed the “Good Enough” tuning!

I just had to share this story here so that you could hear the full story in all the details!

I leaped on this episode as soon as it was posted.  Love(d) it & THANK YOU.  (I bought Craig’s album soon afterwards…just waiting for a moment when I can listen to it on headphones, as he’d like us to).  :-)

I’ve been meaning to write…with about 8 minutes left in the episode, at the point referenced as ‘Act Like It Hurts’ &/or ‘Red Zone’, I love how the highlighted-snippet became the interlude before the solo in ‘Get Up’.  So cool!!

Just finished Craig's episode. REALLY loved this one! I never heard of Craig's music before this episode so it was wonderful hearing his stories ( what an amazing guitarist-Holy smokes!! ). To be honest, I was more hooked into his stories than the " Wild Life " soundtrack moments ( not complaining though. . .hearing the portion of Edward playing Alvin Lee licks toward the end blew me away!! ). Great show, really enjoyed this one as I will be listening to it again and again throughout the next few days.

Been following Craig’s music since he put up those demos years ago. “Hold Everything” is a big favourite at our household. Did not realize he was friends with you until I saw his name on the “Via Zammata” credits. Was happily surprised/delighted to hear his story of how you befriended him back in the day. Any chance we would ever get to see any of the footage he shot from the “Confessions” sessions? Lol Seriously though that was a great episode. Wish Craig all the best. Inspiring that he finally was able to get his album out at last.